With spring finally rolling in, I thought it was about high time that I get some excitement stirring for our new spring releases. What better way to do that, I thought, than to directly talk to the authors themselves. Of course, there was the logistical problem of being here, nestled in Southwestern Ontario, while the authors get to live in those big far away cities. Then it occurred to me. Yes, Facebook Messenger, connecting people across the globe. Why not use that to contact these fantastic authors? That’ll save us both the awkward entrance into a coffee shop where we both have to pretend that we don’t know what the other looks like.

You know, pretending you didn’t just spend three hours creeping someone on Facebook, so you know that’s them when you walk in, but you don’t want to seem too eager so you squint a little bit and go “Are you…?”

With all of those awkward situations avoided, I reached out to one of our spring authors, Klara du Plessis who, for context looks like 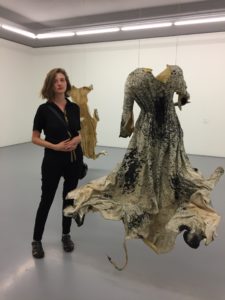 She’s the one of the left. The one on the right is an art piece featured on the cover of her book, Ekke, which is what I wanted to talk about.

Abigail: Messenger, it’s like a the social media equivalent to meeting someone new in a coffee shop. Plus, you don’t have to leave any sort of coziness, so I would say this really works out.

Klara: Totally. Although I did leave the house earlier to walk up to Drawn & Quarterly and check out a copy of Ekke for the first time! They wouldn’t sell me one though, but I did flip through it briefly, and it looks really beautiful. I love the ochre flyleaves and the quality of the paper.

A: That must feel awesome. The book is definitely Instagram worthy, next to a cup of tea or coffee and a baked good. The cover image is so ethereal. 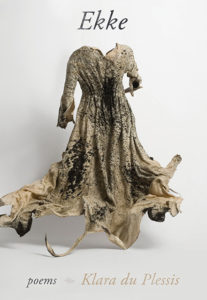 A: Could you talk a little about the cover image? What inspired you to go with that image?

K: I’ve been a fan of Nadipha Mntambo’s work for a long time. I’ve been following her work, so I knew that I liked that particular series of work. There was another sculpture that was my favourite actually, a similar female figure, but kind of on all-fours on the ground. But then it felt a bit too introverted for a front cover, and Jim suggested that it was too graphic. The current image felt perfect in terms of the energy it activates on the cover. It feels like the figure has attitude, and there’s a movement to it that catches the eye. Also, the image seems to work thematically. The medium of the work is cow hide and the poem “Conveyor Belt” is all about cattle. The female form works with the general voice of the poems too, I think.

A: I would definitely agree with that. The cover acts as a sort of visual thesis to your book.

K: I was thrilled when I heard that we would be able to acquire the rights to the image.

A: Rightfully so. So moving away from the cover a bit, and into the language, how many languages do you speak?

K: Four. Afrikaans is my first language, although English is a kind of second first language. I also speak some French and German.

A: I speak a little French and German myself, so I couldn’t stop laughing when you wrote “confusing when lake is meer in Afrikaans but mer is sea in French but See is lake in German…”  It was really interesting to see all the languages splayed out in such a nonsensical way.

K: I’d been walking around with those lines in a notebook for a while before they fit right into that poem. I love making connections between false homonyms across languages. A basic one I play with is “die,” which is the definite article “the” in Afrikaans, but it obviously implies death in English. It just seems so morbid that such a simple word in one language can hold so much weight in another.

A: It’s an awesome concept that definitely deserves more playing around with. Especially since Afrikaans and German are so closely related to English that it’s fun to wonder what could have led to the word being so drastically different.

K: Totally. Or what kind of game the mind can play in poetry by maximizing those shifts in meaning.

A: Exactly. Poetry is definitely the best medium for this type of work.

K: Poetry is so keenly aware of language, so including multiple languages is poetry on steroids. Although sometimes a lot of explaining has to go into it on behalf of the unilingual reader and then it’s like “is this poetry trying to be too smart?” It’s a fine balance of being true to the origin of the poet’s linguistic background and still creating a product that can be consumed. I kind of dream of writing complete nonsense poetry one day.

A: I think you could definitely get away with nonsense poetry. But going back to the present book (Klara: we’ll see if the future project ever materializes.), a bit of a generic question alert: What was the biggest influence in pushing this book from lines in a notebook to the beautiful copy we have today?

K: I’d been interesting in pushing the boundary between the long poem and the essay for a long time. I think the first experiment was with the first poem in the book, “White Stones.” Then the title poem “Ekke.” These were topics that I’d been thinking about for years and felt like I had enough to say to warrant more than the usual ½ page lyric poem. They felt like experiments, but also experiments that I was happy with. I started realizing that this was a genre that I wanted to pursue. In terms of a real “push” though, my best friend of over twenty years passed away in 2015, and I wrote the majority of the book in a very short amount of time as a coping mechanism to survive the grief.

A: I am sorry to hear of your loss.

K: Thank you. I dedicated the book to her because she really suffuses the text in so many ways. She was an amazingly talented artist, and I want people to check out her work and keep talking about her.

A: Is there a place we can do this? A website or anything?

K: Not at the moment, unfortunately. I think her family is working on an archival project. There is a link to a short video piece, which I mention in “Stillframe Inbox.”

The link is here: https://www.youtube.com/watch?v=pMTkTbUgp4k

K: What makes this work cool is that it is one iteration among many. It’s a painting, but she recorded the addition of every brushstroke, which allowed for the making of this stop-frame-animation video. And there are print versions which were papered up as street art installations at a few sites.

A: That is honestly such a cool concept. I love the style.

K: Funny story is that I could have owned this painting, which is huge, by the way. But then she was transporting it on the highway and tied it to the roof of the car in a slipshod way and it got blown off! It was damaged, so then I didn’t want it anymore. Dumb move on my part. But I guess another answer to your question about the impetus for this book could simply have been art!

K: Honestly, I don’t know if I can answer that, but I have been utterly obsessed with Lisa Roberston for a few years now and her latest book 3 Summers probably includes some of my favourite poems of all time, such as “The Seam” or even portions of these poems since they are longform/multi-part. Currently, Etel Adnan is another absolute favourite. I think in terms of poets less than poems. I look for authors/poems that change the pattern of my breathing. Throw me into the ability of creating something myself. Kaveh Akbar is a younger poet who does that for me.

A: That is a fabulous way of putting it. And on that very poetic note, I think I will just ask if there’s anything else you’d like to add about this experience?

K: Oh, I’d just like to thank Jim and Aimee for being such a dream to work with, and thank you for taking the time to talk to me!

A: And thank you for taking the time to talk to me!

Want to attend the first launch? Follow us on our Facebook page for all the updates and RSVP here.