We’re excited to announce the first launch from our spring poetry collections: Off-Leash by Dorothy Mahoney will debut on March 23. If you’re the type of person who knows that March 23 isn’t just any old day — that in fact it’s National Puppy Day — then you are definitely someone who is going to love Off-Leash. And if you didn’t know about National Puppy Day, you’re still going to love this book’s rich exploration of identity and ownership.

Keep reading for launch details and an interview with Mahoney.

Off-Leash is your third collection of poetry. How has your work evolved from your first and second books?

This book is a flexing and stretching. It began in the summer of 2004 as a living chronicle of my husband’s first dog, an Old English Sheepdog, a breed he had wanted since he was a small kid watching the cartoon series Tom Terrific with Manfred the Wonder Dog. Sadly, Manfred died after only five years, so the dog poems grew in other directions. They became a lump of clay that I broke down and rebuilt, exploring form. I was still teaching at that time and wrote with my students, so there were pantoums, glosas, list poems, sestinas, alphabet poems (thanks to Rishma Dunlop and her poem, “Alphabet,” where each line begins with the next letter) and so on. I started writing one-hundred-word stories, drabbles, and then got hooked on haibun, for which Terry Ann Carter was a strong inspiration. Many of the early poems transformed into haibun. This is the form I most like to write now; I try to work my words harder.

The collection considers the roles of dogs in established narratives and cultural movements that range from Biblical stories to kitsch. Did you deliberately set out to create a dog-centered mythology?

You credit many dog lovers for sharing their stories. What was it like writing about dogs — and dog lovers and haters— you didn’t necessarily know?

Dog owners love to talk about their dogs, myself included! Your dog is the easiest thing to talk about, especially when you’re always walking him or her daily. I know the names of many of the dogs in the area, but not the owners’ names. I guess I became a “dog listener”! Everyone has a dog story.

What challenged you the most writing this book?

Of the poems themselves, the poem about my husband’s uncle’s dog, Jiggs. He became a family legend and I wanted to write it as a jig, but I am not musical at all, and I don’t write much rhyme. I got advice from a local musician, Max Marshall, and listened to jigs for two solid days on YouTube. As for the book, giving it to Aimee and Dawn, and convincing myself that it was time to move on. I had been writing other things, but I kept adding more dog stories. Finally Dawn laughed and said it was going to print and that was that.

Any advice for writers who want to take on a thematic collection of poems?

Have some idea of where you are going, and define the boundaries or the project will never be finished in your own mind. Someone is bound to ask, “Did you write about The Littlest Hobo?” (This was a question from our oldest son, and I had to say no!) 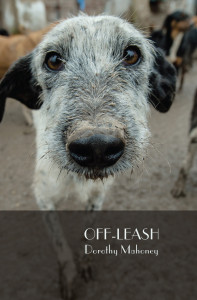